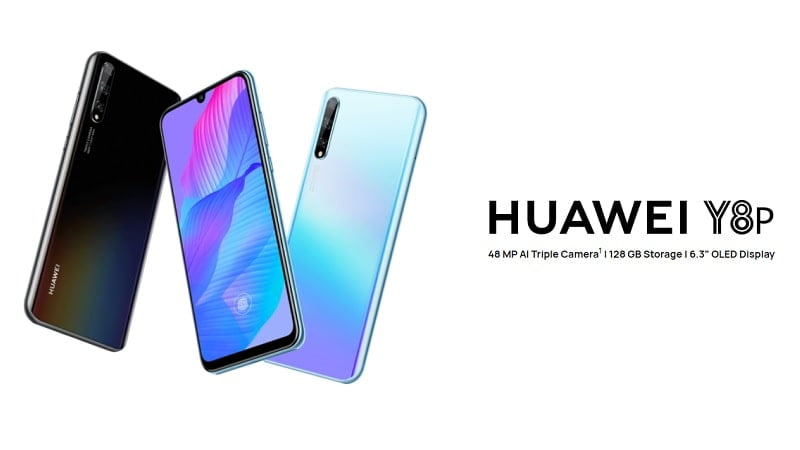 Huawei has launched new phones from the Y series in the Nepali market. Among them, Huawei Y8p is the most powerful model. The company silently launched Huawei P40 Pro a few days ago. Other new models are Huawei 6p and Huawei 5p. All of these are 2020 models and come with new EMUI software. These have new designs, software, and slightly improved hardware. Huawei Y8p price in Nepal is Rs Rs 26,990 for the 6/128GB variant. It is a mid-range offering with decent market standard specifications.

The Huawei Y8p is a mid range smartphone with a 6.3″ OLED panel, Kirin 710 processor, 4000 mAh battery 4 GB RAM base memory, and 128 GB storage. There are three cameras at the back, and there is one selfie camera at the front. These hardware specs show that the Y8p is a decent smartphone. One thing we need to tell about the phone is that there is Huawei Mobile Services instead of Google services. So it is not the usual Huawei we used to have. We will explain this topic later after discussing the hardware.

The Huawei Y8p comes with a 6.3″ OLED screen. Very few models in the market have OLED technology. Well, we should know that OLED screens give better colors, brightness, and blacks compared to LCD panels. The resolution of this panel is 1080×2400 or FHD+. It has rounded corners, and there is a small dewdrop notch at the top. The bezels around the screen are also thin at all sides. For biometrics, there is an optical fingerprint scanner under the display.

Huawei is using a “Light and Shadow” design for its phone. The company always emphasizes on design in mid-range phones. So there is 3D curved edges and a light body. We get a plastic build with rounded corners and a color gradient look. The phone looks radiant with this design and people like this.

Inside the Huawei Y8p, we get a Kirin 710F processor with 8 Cortex-A53 cores. This is quite an old and moderate type of processor. Phones from other competing brands have better SoC than this. So Huawei should consider better chip in their mid range smartphones. This segment is very critical and important as many people shop at this range. So this processor might be a small dealbreaker for people looking for higher performance and gaming power.

In terms of memory, we get 6 GB RAM with 128 GB storage. There is actually a 4 GB memory version in some markets. The phone is powered by a 4000 mAh battery with 10W charging. This is normal speed because phones these days at least have 15W charging. This is also a part that should be improved to make this device better. People demand a big battery and fast charging nowadays.

Huawei smartphones always focus on cameras. The Y8p comes with a 16 MP selfie camera at the front inside the dewdrop notch. This sensor can take videos at 1920x1080p at 30 fps. The rear side of the phone has three camera modules. First is a 48 MP primary SuperSpectrum sensor with f/1.8 aperture. Second one is an 8 MP ultrawide sensor with an f/2.4 aperture and a 120° field of view. Third one is a 2 MP depth sensor with an f/2.4 aperture. This rear camera setup can only record a maximum of 1080p FHD videos at 30 fps. There are modes like Panorama, Super Night, bokeh, time-lapse, and other normal modes. Huawei is using both hardware and software plus AI features to get better results.

Software and Other Features

The Huawei Y8p runs with EMUI 10, which is based on Android 10. This is a new version of EMUI from the company. The phone has all the normal features, layout, and software interface. However, there is a big thing which is very important for everyone to know. These new phones run have Huawei Mobile Services instead of Google Services. This means there is no Google Play store and other apps. We are getting HUAWEI AppGallery to download the apps from the store. This is the company’s own store, and it is growing slowly. In terms of features, the Y8p has GPU Turbo 3.0 for improving gaming performance, Bluetooth 5, and USB Type-C.

Huawei has launched a mid-range phone after a small break. This might be due to the software issues they are facing. Currently, they are not able to use Google services, and that is important for many people. From a pure specifications perspective, Huawei Y8p has a mediocre processor and a decent battery. The 6 GB RAM and 128 GB storage is sufficient for all users. There is support for the Nano Memory card, which is a bit different. This NM ard is not a regular SD card that we all know because this is proprietary. But if you do need to expand the storage, you can use the NM cards.

The cameras on the Huawei Y8p is of normal standard, but it can use some improvement like high-resolution 4K video recording support and slow motion. Else all other things are fine. Now addressing the elephant in the room or the software. We know Google services are important for many of you. However, a lot of apps are available from Huawei App Gallery as well. So, this is a decision you need to make because it is quite hard for us to tell.