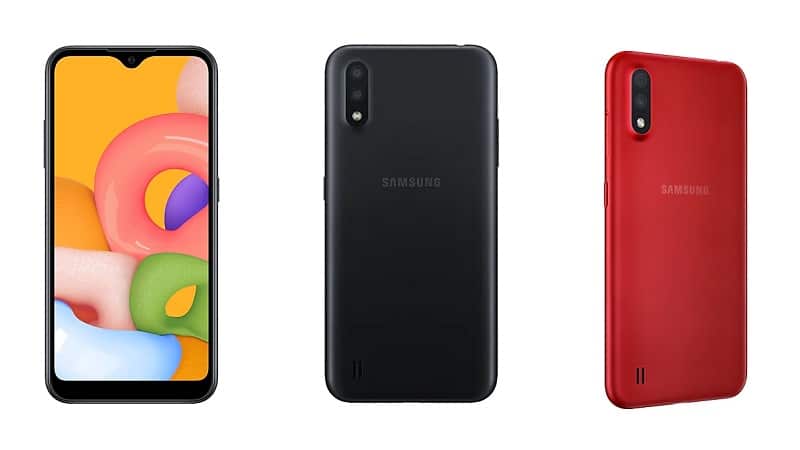 The budget range is very important for any smartphone company in a developing country like Nepal. It is the segment that brings many people to the Android and smartphone world. Therefore Samsung is always focusing on this segment. Here we actually get to see new improvements because we can observe technology getting cheaper and accessible. Galaxy A01 is a new addition in the A series that is meant for this budget segment. The Samsung Galaxy A01 price in Nepal is Rs 13,499 and sits near the Galaxy A10s in the market. However, the hardware is quite different on this phone.

Samsung Galaxy A01 has a bit smaller footprint with a 5.7″ Infinity-V screen. It comes with Snapdragon 439 which is an entry-level processor of 2019. It is built on a 12 nm fabrication process and it is made to give good performance with efficient power saving. This device is for starters and it comes with basic hardware for the time. It has 2 GB RAM which is minimum for 2020 and it also has 2 cameras on the back. These are minimal hardware and they are meant for supporting basic, regular day to day tasks.

Galaxy A01 has a smaller body with an 8.3 mm thickness and 149 gm weight. It is quite light and thus it should be easier to use. This light phone packs Snapdragon 439 which supports LTE Category 4 for downlink and can provide 150 Mbps download speeds on 4G. This means that even budget phones have the capability to provide good internet browsing speed with lower specs. These kinds of devices are important to create reach at lower prices.

This smartphone is offering a 5.7″ Infinity V LCD panel with HD+ resolution. Inside, there is a Snapdragon 439 processor which gives power for basic tasks and also saves power. There is a total of 2 GB RAM and 16 GB onboard storage. It also supports a maximum of 512 GB SD cards. It is powered by a non-removable 3000 mAh battery on the inside. This is the minimum standard battery size for phone of this caliber.

Galaxy A01 has a 13 MP main camera at the back which can shoot 1920×1080 videos. Next, there is a 2 MP depth-sensing secondary camera which helps to take good depth details for the bokeh effect. This is good for live focus and blur effect. But we think that an ultrawide sensor could have been a better choice. On the front side, we get a 5 MP camera inside the top-notch. This helps in the Facial Unlock feature because there is no fingerprint scanner. There is no Auto-Focus, so users need to touch and focus before taking selfies.

Samsung Galaxy A01 comes with Android 10 OS and OneUI 2 which means there is a good interface. We have been using Samsung phones since the start and we have seen many changes. OneUI is much better than previous skins. It is clean, elegant, and easy to use. There are a lot of features inside and it makes it easy for users to find and use them. Galaxy A01 has Dolby Atmos for stereo headphones. This makes sounds much better compared to other phones with no Dolby Atmos. This used to be a feature of high-end flagship and now slowly they have made their way to every phone in Samsung’s portfolio.

For other things, there isn’t much because it is a budget level phone in with an entry-level price tag. We get necessary things such as 3.5mm headphone jack, Bluetooth 4.2, and FM Radio. The connector type is MicroUSB 2.0 instead of Type C. Most budget phones still use microUSB in 2020. The market is slowly shifting and it will change to type C as the adoption rate grows.

Galaxy A01 has a 5.7″ LCD screen. It is good but Samsung’s own OLED could have made it even better. One thing that is a must-have is a fingerprint scanner for security. That is missing but the company has facial recognition instead of that. Most people prefer fingerprint so that could have been a better option. The battery on the inside is 3000 mAh which is good but people expect more. Also in lower-end models with a plastic build, a removable battery is a better approach. Except for these things, the Galaxy A01 is a good phone. There is some polishing needed and we hope the next edition will have all those.

Looking at the spec sheet and Samsung Galaxy A01 price in Nepal we can see that it is targeted to the entry-level segment. It has a smaller screen and footprint which some people want and like. For the price, the internal processor and hardware is reasonable. We like the fact that they are offering so many models in the small price differences. Galaxy A10s is just a little bit expensive but that smartphone comes with a much bigger screen and battery. A diverse portfolio is better for everyone.