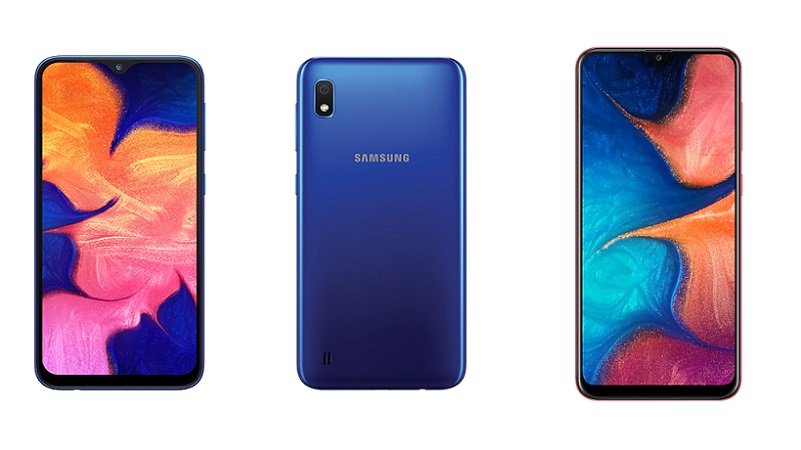 After successfully launching Galaxy A30 and A50 in Nepal, Samsung has launched Galaxy A10 and A20. These are the starting models for the new A series. Both are budget or entry range smartphones. Samsung has now discontinued J series and they are now focusing on M and new A series. Their Galaxy M10 and M20 are quite popular and this new A10 and A20 are also going to compete in the same price range.

At the time of launch, the official Samsung Galaxy A20 price in Nepal is Rs 20,490. Another entry-level option is A10 and the Samsung Galaxy A10 price is Rs 14,190. These prices are near to their competitor M10 and M20. This closeness has its own pro and cons. People have many options from the same company but on the other hand, many people may be confused.

Samsung has changed the naming scheme and the strategy for their A series phones. Their phones suffix were all using digits under 10 now they are above 10. Samsung Nepal is also launching new A70 in Nepal. This shows that the company is focusing on our market and they want all of their products to be in reach of people. This is good because people get a lot of choices and they can buy phones whichever falls under their budget.

Samsung Galaxy A10 and A20 Specifications

Let us first list specs of Galaxy A10 which is the base or entry level phone.

Below listed hardware are the specs of Galaxy A20.

Both smartphones have a notch at the top which is very less intrusive. They also support SD card up to 512 GB. New Samsung phones now support very high-density cards which is amazing and great for users. Galaxy A10 and A20 use same Exynos 7884 chipset which has 8 core processor. There is a dual-core 1.6 GHz set and hexacore 1.35 GHz set.

Galaxy A20 has 13 MP main and 5 MP ultrawide camera ta back. This makes more sense than older telephoto because these days ultrawide shots are trending. This sensor gives better power and wider frame so that they can capture wide landscape shots, nature shots with ease. The front camera is also 8 MP which is a good improvement for such budget tier smarphone.

A series of phones used to be Samsungs mid-range offering but now it is a very big lineup. In case of these new Galaxy A10 and Galaxy A20, we see that phone phones have a big screen but there A10 uses IPS LCD while A20 uses AMOLED. We expected A series to have SuperAMOLED screen as they used to have earlier. We know A10 is the only one, not having so we give it a pass. But honestly, we have received so many feedbacks that users definitely feel Samsungs AMOLED panel are superior to any other company’s display. Many of our readers also chose Samsung phones just for a good display.

On the topic of hardware, the set is good because both phones have same octa-core processor which is capable of basic and mid-range tasks. If we see the memory and storage Galaxy A10 has 2 GB RAM and 16 GB storage which is a must-have these days and for the price it is good. For Galaxy 20, users get 3 GB RAM and 32 GB storage which is good but then there is M20 with almost the same specs. So there is internal competition.

Cameras on both phones are very good. Galaxy A10 has 13 MP at back and 5 MP at the front which gets all basic job done at a very good quality. The A20 has a better camera as it also comes with the ultrawide sensor. Samsung is doing a good job with their budget and mid-range phones these days. We hope to see more new better phones and more storage options soon.