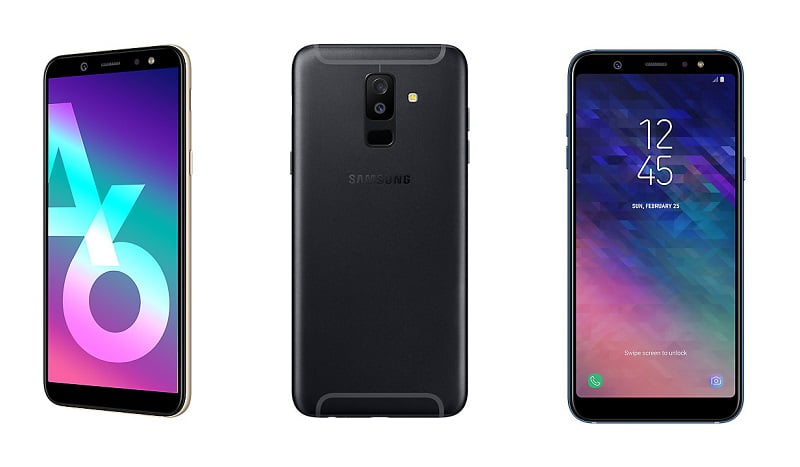 Samsung now has a very big A series from 2018. They added lots of phones in both A and J series this year. These phones are below the Galaxy A8+ and these are meant to take place of older A5. Now people are getting new models which are replacing older ones. The official Samsung Galaxy A6 Price in Nepal is Rs 39,890 and price of Galaxy A6 Plus is Rs 44,390. Both of these are mid range phones and there is a small price difference.

We are saying small price difference because in this segment the price delta is marginal. In Nepal Forum 2018 Meet, the company officials said that people are now buying more expensive phones. Everyone is slowly shifting towards upper range. Mid range is now a start ground and flagship market is also expanding. Galaxy A lineup is one of the most popular family since start.

This range has phones which comes with balanced hardware, almost flagship level features and slightly diluted design. Galaxy A6 and A6+ are also have the same DNA and they do pack new punch for the market. As there are two phones we shall compare them in tabular form to make it easy for our readers.

We can see that there are some major differences between both of these phones. Samsung is not sticking big screen and battery with the bigger brother this time. The Galaxy A6 and A6+ both have different chipset. One is Exynos from Samsung and next is Qualcomm product.

By the way both phones have same amount of memory and internal storage. These can support maximum of 256 GB external memory card as usual. The fingerprint sesor is just below the rear camera which looks nice. These phones feature the Samsung’s so called Infinity display with is 18.5″9 tall screen. Both phones are running on Android Oreo.

Samsung has now fixed the game of sensors. They are now putting all the required basic sensors like gyrosensor, compass and others. Previously this used to be a minor setback for enthusiasts. Both of these phones are a media power house and clearly they target the youths. There front camera resolution indicates this very clearly.

Users can enjoy features like Dual Messenger and auto WiFi switching. There is Face Unlock feature as well as a LED flash at the front side. AR stickers are now available with both of these devices. People seem to like them and it can be interesting in online conversations.

Samsung is providing the best quality AMOLED screen which is their signature. Also they are using the f/1.7 sensors which gives great low light results and bokeh effect too. The Galaxy A6+ features dual camera setup which has better background blur effect. Even though both phones have high pixel density camera, they only record at 1080p at 30 fps. This is now very unlikely and out of date. People expect 4K UHD recording features and this is another setback.

On paper overview Galaxy A6 and A6 Plus are good phones with powerful hardware and good looking build. But it all comes to price and market offering. We know that many people buy Samsung products due to the brand and their after sales. It is a good thing but we should also think of hardware value. Package is good but there are many good competitors out there and Samsung’s own older flagship might be a good option if you are at this budget segment. Among these two we would suggest the Galaxy A6 Plus because of the better camera, bigger screen and battery it offers.