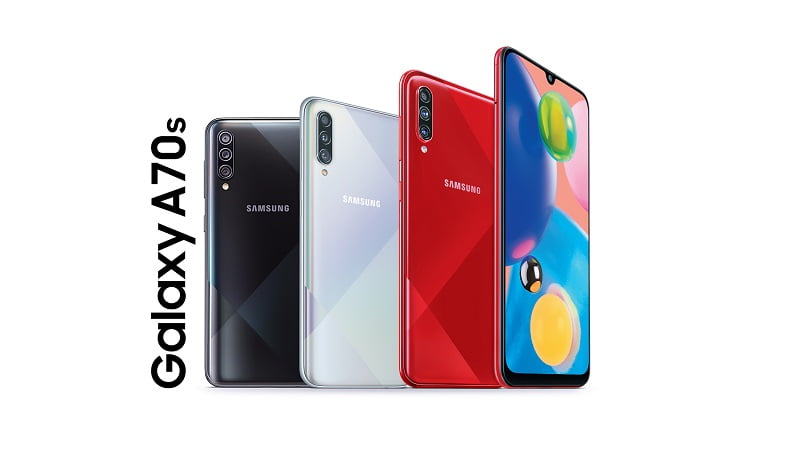 We reviewed the Galaxy A70 a few months ago and it was a really good smartphone. Now after a very small gap we have the new Samsung Galaxy A70s. This is another addition to the new As series. The company is updating its series twice in a year. In a simple overview, this new model has updated the camera which means at the backside there is a 64 MP camera. It is a mid-range sub 50K phone and the price of Samsung Galaxy A70s in the Nepali market is Rs 48,890.

In June of this year, we reviewed the Galaxy A70 and gave it top stars. It is a really good phone with a good camera, screen, and battery. We still recommend it but now the Nepali market has a new option on the buffet. The Galaxy A70s comes with a new camera feature for the shutterbugs. The goal of the update is to stay updated with trends and market demand. Samsung is pushing bigger sensors on new phones these days. The A50s also comes with a 48 MP sensor.

The main sensor has lots of pixels and it definitely produces high-resolution photos. This is great and we are expecting even high pixel dense sensors in upcoming phones. We do get a better-looking model with gorgeous shining back. It shows better geometric patterns and looks amazing. However, most people put cases and we also recommend to do so. As we said earlier there are no big differences in the predecessor and the successor. But we would like to list out the specifications of this phone.

If we compare the specifications of the A70 with this new update we find no difference except the camera. These days companies are chasing for the high number and pixel count. This is very good for consumers and we are hoping to see even higher counts. It is rumored that Galaxy S11 will come with a 108 MP camera. So we hope mid-range phones are also getting better sensors soon.

However talking about the specs, we have Snapdragon 675 which is an octa-core processor. It is a good processor and it is very popular as well. However, it is getting quite old. But still, it is a capable chip and here it comes with 6 GB RAM. In Nepal, we are only getting a model with 6GB memory and 128 GB storage. Now coming to the jewel of this phone. There is a 64 MP wide-angle camera with f/1.8 aperture. This is a massive jump in terms of resolution and pixel count.

There are more useful features like Night Mode, Super Steady for videos and 123° wide-angle view as well. The Alive camera feature helps to get the best shot and most of all we have 4K recording at 30 fps. Both A50 and A50s are media consumers and camera lovers pick. It has a high pixel sensor to attract starters and it also high-resolution selfie camera for the selfie-loving generation.

Overall Galaxy A70s is a good phone with decent mid-range hardware, giant amazing screen, big battery and lots of features. We can also say that there are no compromises. It also has new generation camera sensors so it is an updated smartphone. However, we have to consider the fact that it is priced a bit higher than the A70. The only difference is the camera and for most, it should matter much.

So we think that Galaxy A70 is still a better option as it is quite cheaper and comes with the same level features. But if you need the latest model with all the latest features like high megapixel camera and new design then Galaxy A70s is a good option.