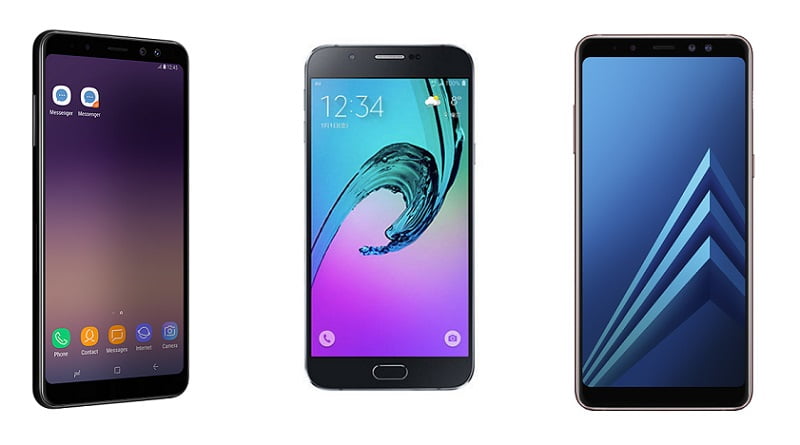 Samsung has released new Galaxy A8 and A8+ (2018). The A series actually came in 2014 but the A8 first came in 2015. Then next year, Galaxy A8 (2016) also came. A series consists of lots of phones but A8 is best offering and now A8 Plus is top of line. Phones of this series always pack almost flagship level hardware and features. There are lots of variants of this phones, so we have made a comparison to show what is different and what s updated.

Samsung makes lots of phones for every budget. They have offering for entry level, mid range and high end segment. A level phones come inside mid range segment. This year 2018 models came out just after New Year. People in upper budget and mid range mostly buy A series phones.

We compared A ( 2016) and A (2017) phones in previous post. Personally we love phones of this family very much. They have beautiful updated design, top level hardware and long support. Our 2015 models got update till late 2017 which is wonderful.

This year, the company launched two versions, plus and regular variant. Obviously the plus is better. The design is similar to Galaxy S8 and Note 8. Fingerprint sensor placement is definitely telling upcoming changes on phones this year. It seems Samsung is going with full screen on front from now on.

To start this comparison, let us start by comparing latest Galaxy A8 Plus 2018 vs Galaxy A8 2018.

Both of these have quite similar specs. They have same chipset, processor and GPU. Both phones on launch are running on Android 7.1.1 Nougat but will be updates to Oreo. A8 Plus excels in few regions like screen size, battery size and RAM option. The regular A8 2018 only has max 4 GB RAM and 64 GB storage option. While A8+ has 6 GB RAM and 64 GB storage option. The RAM is actually greater than Galaxy S8 and thus competes with phones like OnePlus 6 as well.

Samsung is also now in selfie game. Instead of two back shooters like Note 8, we are getting dual cameras at front. This specifically targets selfie loving youths. They are packing f/1.7 wide aperture optics at back but there is only maximum of 1080p shooting support. Still, both phones pack lovely features like IP68 rating, fast charging, AOD, VDIS, lots of sensors and expandable storage up to 256 GB.

Face recognition and Bixby assistant has also made their way to here. There is no dedicated Bixby button by the way. The tall 18.5:9 aspect ratio screens are also protected by new Gorilla Glass. The new fingerprint placement is much better and should continue for other upcoming phones too.

Now let us compare with older phones all at once. We shall compare Galaxy A8 2016 and original Galaxy A8 2015 with new successor.

The Galaxy A8 has come a long way and large changes. Its style changes as trend and company’s flagship lineup. Screen size is almost same but resolution is bit higher this year. Display aspect ratio is 18.5:9 from traditional 16:9. Chipset and processor is getting better each year and A8 (2018) and A8+ features best processor till now.

Storage and RAM options are also doubled now. Users can now enjoy 6 GB RAM with Plus and 4 GB RAM with A8 normal. External SD card support is also now higher than earlier models. The battery size for new Plus is better but normal variant is less than 2016 edition.

Best upgrades are in camera, design and software improvements. Now Samsung packs their best f/1.7 sensor and lots of pixels. 2018 models have dual front camera for first time in Samsung’s history. The picture and video results are clearly better with new successor. Fast charging, IP 68 rating have also made their way as it was not present in any older models.

Samsung’s new Experience UI is also trimmed, more natural and fast. Software experience is smooth and battery life is also getting better. Everything is on point but support for 4k recording would have made the new A8 series more golden.

These new phones pose a good challenge in market for many mid range phones. Clearly we can see that new Galaxy A8 2018 is better in all ways. It is a great buy if you are in market for new one. For power users, we highly recommend A8+ with 6 GB RAM or add a bit more and consider Galaxy S8 if you want a premium phone.