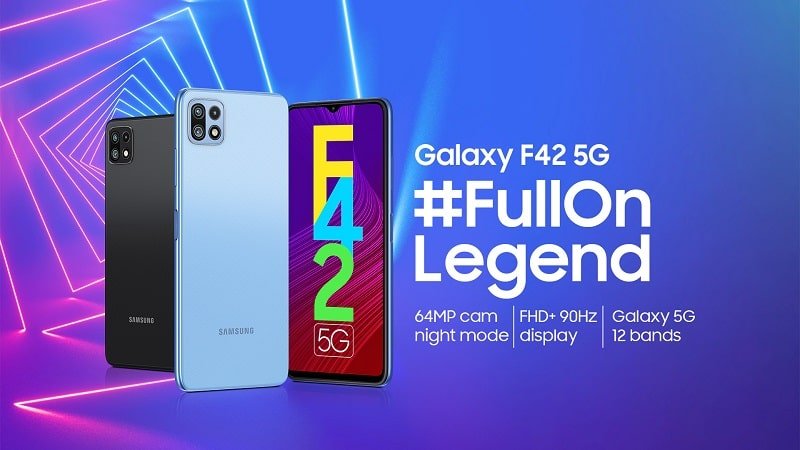 Samsung Nepal has launched the Galaxy F42 5G in Nepal and this is the successor of Galaxy F41. It is a 5G ready phone with support to 12 bands. Nepal and India still don’t have an active 5G system but Samsung is getting ready for the upcoming market boom. The Samsung Galaxy F42 5G is a mid-range smartphone of the F series. With the launch of this phone, Samsung has 3 mid-range 5G phones in the market for 2021. They have one in each A series, M series, and F series. Samsung is using the tagline “#FullOnLegend” for the F42 5G but let’s see what this device actually has to offer.

The Galaxy F42 has a fairly similar design to its predecessor F41. It has a big rectangular body with rounded corners, a large screen, a rounded back, and a small chin. The phone has a dimension of 167.2 x 76.4 mm and 9 mm thickness. On the left side of the phone, there is a SIM card and SD card tray. Similarly, on the right side, there is the volume rocker and power button with a fingerprint scanner embedded with it. On the backside there square camera island and Samsung branding. Finally, there is a 3.5 mm headphone jack, USB Type-C port, and speaker grill at the bottom.

Samsung Galaxy F42 5G has MediaTek Dimensity 700 SoC with Mali-G57 GPU on the inside. This is a 7 nm processor and it is comparable to Snapdragon 720G in terms of performance. Therefore one can expect mid-range performance from the processor. Inside the Galaxy AF2, the Dimensity 700 is paired with 6 GB RAM and 8 GB RAM. In the case of both RAM variants, the internal storage is 128 GB. In addition to onboard storage, there is support for external SD cards up to 1TB as well. For the battery, there is a 5000 mAh non-removable battery and it supports 15W charging.

The front of the Samsung Galaxy F42 5G has an Infinity-V TFT LCD screen with 1080×2400 resolution and a 90 Hz refresh rate. In comparison to Galaxy F41, there have been both upgrades and downgrades. The screen size is now bigger on Galaxy F42 and there is also a faster refresh rate which is an upgrade. However, the display technology is TFT in Galaxy F42 while the older Galaxy F41 has Super AMOLED.

The screen of F42 5G has a notch at the top where an 8 MP selfie camera resides. This 8 MP front camera can take videos at a maximum resolution of 192×1080 at 30 fps. Again if we compare this to Galaxy F41, it has been downgraded from a 32 MP sensor. Therefore the front camera is also not as it should have been.

Moving towards the backside, there are 3 cameras in total with LED flash. First camera is a 64 MP wide-angle camera with f/1.8 aperture and Phase Detection Autofocus (PDAF). Second one is a 5 MP ultrawide angle camera with f/2.2 aperture, and a 115˚ field of view. The third one is a 2 MP depth sensor with an f/2.4 aperture. This camera set can record videos at a maximum resolution of 1920×1080 at 30 fps. Again comparing this rear camera set of Galaxy F42 5G with the camera set of Galaxy F41 we see downgrades. In the case of the F41, there is an 8 MP ultrawide angle camera with 123˚ field of view, 5 MP depth camera, and maximum video recording support is 4K at 30 fps. So overall, this year there are no improvements at all.