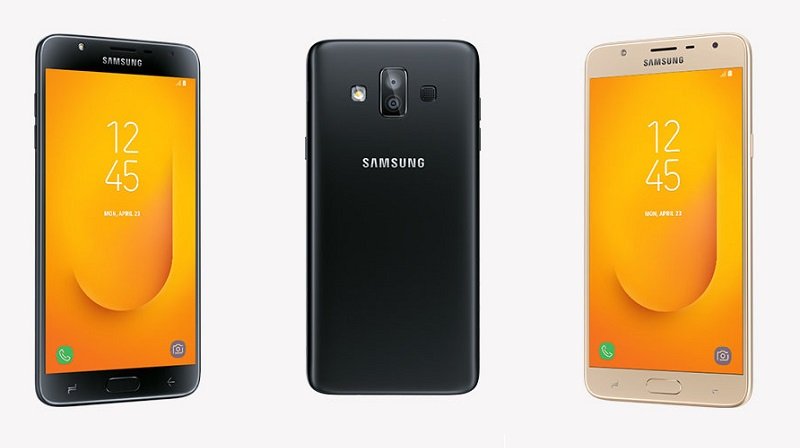 Samsung Galaxy J7 Duo is the new 2018 J series phone in Nepal. It was teased by their official Facebook page for few and days as well. This is one of new Samsung’s entry mid range phone with dual camera. It is an interesting addition in the series and provides great choice to users. The Samsung Galaxy J7 Duo Price in Nepal is Rs 28,990. The Duo challenges lots of its own siblings in the series like J7 Pro and Max which is interesting.

We can see that the J series started as budget range lineup but now it is a mid range lineup. The Galaxy J7 Duo is another addition in the J7 family. It is a very diverse range because there are lots of phones of different type. Samsung makes new updates each year but this time the camera is a major upgrade. It is Dual Sim Phone but its name is Duo due to the cameras at back.

Samsung Galaxy J7 Duo has a 5.5” 720×1280 Super AMOLED screen at front. It is a normal display with 16:9 aspect ratio. On the internal, the phone is powered by Octa Core processor on Exynos 7885 Chipset. Samsung’s Exynos Chipset are usually better than other counterparts as well. The octa core processor consists Cortex-A72 2.3 GHz dual core and Cortex-A53 1.6 GHz hexa core set.

So Samsung is pairing low frequency core in hexa core system and high clock core in dual core system. This seems to help in power management and increasing battery efficiency. Talking about memory and storage, there is 4 GB RAM and 32 GB on-borad storage. As usual it also supports memory card up to 256 GB. Samsung has increased the memory size for mid range phones now. This shows that the market demand for high RAM and company’s adaptation.

Coming to the camera, this is where things are new. Samsung Nepal now has a mid range phone with rear dual camera setup. The Galaxy J7 Duo features 13 MP f/1.9 and 5 MP f/1.9 cameras at the back. This gives the mobile ability to have depth of field effect with live focus. The maximum video recording resolution is still only 1920×1080. At front there is 8 MP f/1.9 camera which is good in terms of hardware.

Impressions: J7 Duo has a fingerprint sensor at the front. At the back there is a 3000 mAh battery to provide power. It currently runs on Android Oreo so it is sure to get next major OS update later. This is pretty tough competitor for the Galaxy J7 Pro in our view. The Duo has higher RAM, newer processor and dual camera which gives  it upper hand. But on next side Pro has high-res screen and bigger battery.

So there is a choice to the users because if they want a higher RAM, dual camera and new hardware then J7 Duo is the way to go. Else if you want sharper screen and better battery life then Pro is a good choice. So Galaxy J7 Duo is not a perfect package but it is a good option for the the customers.