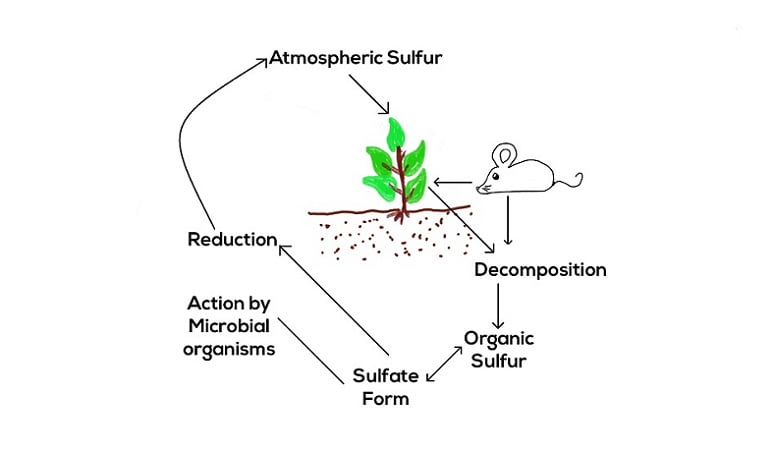 The Sulfur cycle is one of many biochemical processes that occur in our nature. In this process, sulfur/sulphur (S) moves through the biotic and abiotic compartments of the Earth in various forms. It changes its chemical form along the way and moves between the biosphere, atmosphere, hydrosphere, and lithosphere just like carbon and nitrogen. Mother nature has its own way of managing the circle but due to increasing pollution, we humans are disturbing it.

In school, we all learn about the water cycle and the carbon cycle. But we don’t get to know about sulfur in detail. It is important for us living beings and we want to shed some light on this. It is found in life forms but also used in dangerous things such as explosives. In nature, this element exists in the form of Sulphate(SO4) and Sulfide(S2-). It is present in amino acids like cysteine, methionine, and vitamin thiamine. There are many dangerous chemicals that can be formed using sulfur as well.

Actually for simplicity, we can do a sulfur cycle summary in a few sentences. It is just an elementary understanding of this complex chain. To start, plants acquire their supply of nutrients from micro-organisms in the soil and water, which they convert into usable organic forms. Animals acquire sulphur by consuming plants and one another. Both plants and animals release it back into the environment when they excrete. When they die the body decomposes and releases (S) as micro-organisms assimilate on them. Thus the cycles continue for living beings.

The above explanation of the cycle is very very simple and basic. This part of the cycle can form its own loop in both terrestrial and aquatic environments. It occurs when sulphur is consumed by plants and animals and then released again through decomposition. Plants take it to make chlorophyll and synthesize proteins plus vitamins. The fruits and vegetables are consumed by animals and humans. After assimilation, gases and wastes are reduced which goes to the environment. Plants and animals also die and during decomposition, they also release various sulfur-containing compounds and gases. These mix with water bodies, rivers, and air.

Water bodies take these compounds to the sea. Element number 16 or (S) is also found around volcanoes and geothermal vents. When volcanoes erupt, massive quantities of sulfur dioxide (SO2) are propelled into the atmosphere. Weathering of rocks and the production of volatile sulfur compounds in the ocean can also both lead to the release of this element. Some bacteria also produce Dimethyl sulfide and Hydrogen sulfide (H2S). These chemicals again break and mix into the environment, water and soil. Through these sulphur cycle steps, the chain works in the ecosystem.

Increasingly, atmospheric sulphur is a result of human activity, such as the burning of fossil fuels. Once in the air, sulfur dioxide reacts with oxygen and water to form sulfate salts and sulphuric acid (H2SO4). These compounds dissolve well in water and may return to Earth’s surface via both rain, wet and dry deposition. There are also vast reservoirs in the planet’s crust as well as in oceanic sediments. In the sulfur cycle, the element moves in different forms and states. There are mineralization, oxidation, and reduction process going on to run this chain.

Importance of the Sulfur Cycle

Sulfur is a very important element for living beings just like Carbon. It has huge importance in human life as it is present in many molecules. This essential element (S) is found in many life forms. Many of the compounds and molecules that we need for life are based on this element. It is one key component of various organic compounds. Here are some of the importance of this element.

Pollution and Adverse Effects on the Sulfur cycle

There are different types of pollution and they are all harmful to the earth and its living beings. We should never let any factor be adverse to our environment. Everything is good only if it is in a safe limit. If anything is over the limit imbalance occurs and then the problem arises. All human activities produce some byproducts, so we must be very careful about them because they can have a detrimental effect on nature and eventually us. These days the amount of sulphur is increasing in nature.

There is an imbalance in the ecosystem. It is due to the increasing use of fossil fuels, industrial waste, pollution, and uncontrolled chemical discharge on water bodies. We are putting more and more untreated water in the environment which has sulfur. Everything needs to be in proper order and amount for our nature to work.

The increased sulphur is accumulating on rocks, oceans, soil, and air. Sometimes the Sulfur Dioxide (S02) in the air mixes with raindrops and form acid rain which is very harmful. It can destroy monuments, crops, structures and have detrimental effects on animals and other natural bodies. We can see that sulphur is very important to us. It is in play all the time but it can also be dangerous sometimes. The production and accumulation rate are record high and it needs controlling for the sustainability of our environment. These are some of the facts and importance of this crucial cycle.